marcusmarketing
0 Comment
By Debra Littlejohn Shinder
March 27, 2012, 12:07 PM PDT
Takeaway: Microsoft could, and should, take the lead in simplifying the licensing process for consumers and for businesses.

Most people grew up in a society where products are bought and sold. The butcher cuts up meat and sells you a steak. The baker bakes a loaf of bread and you buy it. The candlestick maker – well, you get the idea. The common element is that once you paid for that product, it’s yours to do with as you please.
In the past, that was even (mostly) true of so-called intellectual property. Someone wrote a book. Someone published it by printing it up on paper and sold it to you. You could read it as many times as you wanted, anywhere you wanted. You could keep it on your shelf for the rest of your life, or you could loan or give it or even sell it to someone else, who could then do the same. It was the same thing with a record album or a framed painting.

Automatically sign up for our Windows Desktop Report newsletter!

Then along came computers, software and digital information. And suddenly all the rules changed. Instead of selling you a product, software vendors – and then providers of digital content – sold you a license to use the product. It made sense because a software program isn’t a tangible “thing.”
That’s why, regardless of what the anti-piracy commercials say, under the statutes of many jurisdictions copyright infringement (which is itself a crime) is not the crime of “theft.”
The legal definition of theft usually goes something like this:

The unlawful appropriation of property without the effective consent of the owner, with the intent to deprive the owner of the property. (Texas Penal Code, Sec. 31.03).

The problem is that when you “steal” a software program (or digital song or movie or book), you don’t deprive the owner of the property. He/she still has full use of it; it’s just that you have a copy of it, too. Thus a different model was created for selling the rights to use a creative work.
In the early days of computers, the software was installed by the company that sold the hardware. Then in 1985, a Supreme Court case namedDigidyne v. Data General set a precedent by ruling that tying the software to the vendor’s hardware was an “illegal tying arrangement.” The result was that Data General was forced to license its operating system to other vendors (makes one wonder why Apple doesn’t have to license its OS to other hardware makers, doesn’t it?).

When you buy something, you receive a receipt. You might, or might not, also receive other documents such as a warranty. If you pay for it in installments rather than outright, you usually sign a contract which lays out the payment terms and the obligations of both parties. You also have a contract, even when paying outright, if you purchase something for which title of ownership must be registered, such as a house or car.
Software licensing traditionally has had some of the characteristics of a sale (a one-time payment rather than ongoing payments, although this changes with the Software as a Service model) and some characteristics of a rental (explicit limits on how you can use it). However, the license terms make it clear that:

“The software is licensed, not sold. This agreement only gives you some rights to use the features included in the software edition you licensed. Microsoft reserves all other rights. Unless applicable law gives you more rights despite this limitation, you may use the software only as expressly permitted in this agreement.” (Standard language in Windows and Office EULAs) 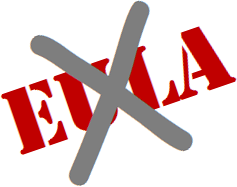 The contract that governs an individual’s use of a piece of software is usually known as an End User License Agreement(EULA). A EULA is somewhat unusual in comparison to other contracts because you don’t have to actually sign the contract to become bound by its terms. Instead, you may be deemed to have agreed to the terms simply by clicking a button or even merely by opening the box.

Instead of licensing software “one piece at a time,” companies often enter into volume licensing agreements with software vendors. Simply put, this type of license allows you to install multiple copies of a software product on different machines, using the same volume license key (VLK). As with individual licenses, there are usually restrictions, such as the number of installations allowed, the scope (that is, the key can only be used for machines within the purchasing organization), and so forth.

Microsoft has long been criticized for its confusing licensing structure, with Ed Bott once calling the licensing scheme for Windows “practically Byzantine” and even Microsoft’s own TechNet site notes that you’ll probably find yourself completely confused as you “plow through licensing” in preparation for deployment of Windows 7.
To be fair, Microsoft is by no means the only software company with a licensing mess. Licensing structures are a bit like government legislation: Even if they start out simple, over the years they become more and more complex as they must cover more and more situations and, in both cases, as attorneys get more and more involved.
In the case of the law, this “it just grew that way” state of affairs is difficult to rectify due to the complexity of the mandated process for making changes. In the case of software licensing, there’s no such excuse. Companies can (and sometimes do) change and simplify their licensing schemes any time they want. And there are good reasons they should.

The administrative overhead involved with keeping up with licensing issues has, in some organizations, grown into almost a full-time job. If you have a volume license, you usually need to deploy a Key Management Server (KMS) to activate your licenses. To qualify, you must have a minimum number of computers to activate (at least five Windows Server 2008/2008R2 systems, at least twenty-five Windows Vista or Windows 7 computers, at least five Office 2010, Project 2010 or Visio 2010 computers). If you don’t have enough, you have to get a Multiple Activation Key (MAK) instead of using the KMS.
It’s telling that there is an entire TechNet web site dealing with licensing and volume activation,with almost fifty links to various activation planning guides, activation management tools, and pages such as Choosing the Right Volume License Key, Determine Reporting Needs, and Determining Product Key Needs for KMS.
Some customers have reported that even Microsoft’s own licensing experts don’t seem to understand how the licensing structure works, or at least different persons within Microsoft interpret it differently in response to customers’ questions. And I won’t even get into the licensing maze surrounding all the different server products: per-seat licensing, per-server licensing, per-processor licensing: It’s enough to make you wish you’d pursued a career in neurosurgery, instead, since it couldn’t possibly be any more complicated than this.

Although the biggest licensing headaches are reserved for IT pros in a corporate environment, consumers don’t entirely escape the frustrations of dealing with licensing issues. Many don’t understand the difference between a Windows OEM license (what you have if you bought the OS preinstalled on your computer) and a retail license (what you have if you bought the OS software and installed it yourself), or between an upgrade license (which require that you already have a license for a previous version of Windows) and a full license (which doesn’t). And now there’s the Anytime Upgrade license thrown into the mix.
The type of license you have determines whether you can transfer the operating system to a different computer or not, whether you can transfer it to someone else by selling or giving your computer to another person, whether support is provided by Microsoft or by a hardware vendor, and a number of other “whethers.” Back in 2009, Ed Bott did a good job of explaining these issues in his article titled What Microsoft won’t tell you about Windows 7 licensing.

Nonetheless, many consumers are still confused. Many don’t realize that they need a separate license to install Windows or Office in a virtual machine on a system that’s already running Windows and Office. It may also never occur to users that they’re in violation of the EULA if they make two backup copies of the installation disc instead of just one. (All these provisions are from the Windows 7 EULA).
How many end users are unaware that they’re allowed, under the terms of a retail license for Office 2010, to install it on two computers – as long as the second one is a “portable” device? The first, primary computer (which could be a desktop or portable machine) is designated as the “licensed device” and the second (which must be “portable” – although it’s not clear whether this would apply to an ultra-compact desktop system such as the PCs that emulate the Mac Mini form factor)  as the “portable device.”
On the other hand, if you have the “Home and Student” edition of Office 2010, you can install a copy on up to three licensed devices in your household for use by people for whom that is their primary residence. You have to wonder how many folks, trying to be “legal,” may have purchased copies of Office they didn’t need to buy because they didn’t know about that provision. 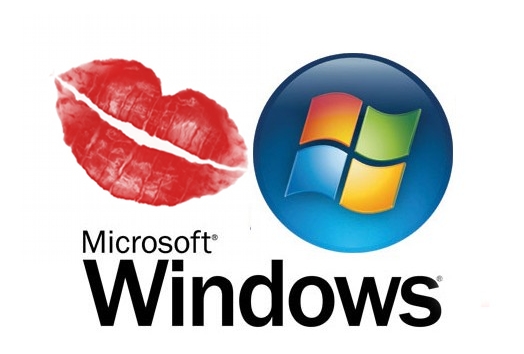 The one-word mantra in the technology world today, and especially in the consumer space, is “Simplicity.” Apple started that trend in relation to the user interface and Microsoft has followed that path with Metro. We live busy lives in a busy world and we don’t have the time to wade through pages of legalese, only to still be unsure about whether our use of the software we paid for is in compliance.
Overly complex and inconsistent licensing terms cost companies money and cause consumers frustration. Microsoft isn’t the only – or necessarily even the worst – offender but because its products are so widely used, its licensing complexities are the most high profile – something that almost everybody has to deal with at one point or another.
Microsoft could, and should, take the lead in simplifying the licensing process for consumers and for businesses.
Share this post